More on this on Wikipedia:
→ Aztec

Aztec is one of the civilizations in Civilization VI.

In Civilization 6, each civilization has two abilities. One is based on what the nation has done throughout history and the other is tailored to what happened during the ruler's reign. Montezuma leads the Aztec Civ in Sid Meier's Civilization VI. He built the Aztec capital into one of the greatest cities in the world. Montezuma ordered the construction of aqueducts and temple complexes and kept the Aztecs growing through conquest.

Amenities are linked as well in the Tlachtli. This unique building in the Entertainment Complex gives Amenities,

The Aztec unique unit is the Eagle Warrior. This powerful version of the basic Warrior unit can turn defeated enemies into Builder units. This ability plays well into the Aztecs' Unique Ability to use their Builders to speed the construction of districts.

The Aztecs are a fantastic civilization for conquest. Early in the game the Eagle Warrior will give them a strong combat edge. Each enemy defeated will be an opportunity to speed construction of early districts, bringing your cities online quickly.

As you progress through the mid and late game the Aztecs can establish extensive empires by grabbing new Luxuries on the map and using their Amenities bonus to offset their expansion through military conquest.

Pre-ordering Civilization VI gave players 90 days early access to the Aztec civilization. After this period, the content was made available at no additional charge to all owners of the game. 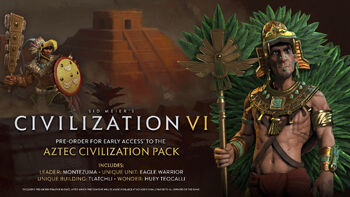