Edit
This article is a stub. You can help Civilization VI Wiki by expanding it. 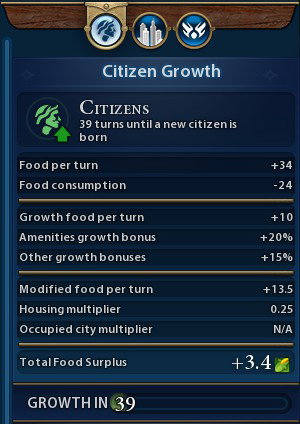 Citizens are one of the Game Concepts in Civilization VI.

Citizens represent the population of a city. Each of your people

can work one of the Tiles within a city's borders, or it seems can work in a building as a Specialist. Citizens that work tiles produce a combination of

Culture, depending on what Terrain or the Tile Improvements they are assigned to.

By default the game will manage your citizens and specialists for you, although you can manually manage them in the city view or on the bottom right of the UI if you wish.

Food surplus. After you produce enough excess food, another citizen will be added to the city. When a

Settler Unit is created, the city's population is reduced by one. The more citizens in your cities, the more Tiles you're able to work, thus adding to the productivity of your city.

At the beginning of the game you'll want to micro manage for growth, presumably to grow to additional Citizens. Once you've grown to a few people you can start growing wide by building Settlers, and you can start establishing new cities, probably in less hospitable locations. You’ll want to start reassigning citizens early on to either boost

Production, growth or manufacturing, and thus have highly specialized cities, depending on what you want or need.