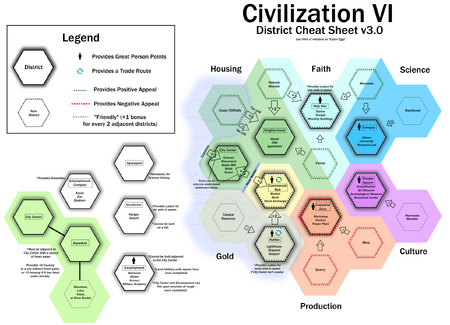 This chart shows all of the District adjacency bonuses available and can be a guide in placing them for the best strategic benefit.

Each City in Civilization VI is now comprised of Districts, and there are a total of 13 district types including the city center. Each has a different role and has different bonuses based on its type. Districts are unlocked through Technologies or Civics and are limited by population, requiring 3

Citizens allows 1 Districts, 4 allow 2, 7 allow 3, etc.). Districts are required for the majority of Buildings in a city, and most can fit up to 3 of them. See also: Production for a complete list of things to build.

Buildings are no longer trapped in your City Center, but may sprawl across your territory as part of Districts. The map is more important than ever as you are faced with important strategic placement decisions. Campuses and Holy Sites alike receive special yield boosts from placement near Mountains (

Science for the Campus, and

Faith for the Holy Site), but only the former also benefits from a nearby source of Rainforests.

When a city is ready to construct a new item, the city’s "Production Menu" will appear. If a district is available to be constructed, it will appear on the menu on the right hand side of the screen. Click on the district to order the city to begin construction, which opens the district placement lens. Here, you will be given an overview of the different yield outcomes available on the Tiles surrounding your City Center so you can better make a decision about where to place your new district. This lens will also show you which tiles are unavailable, as some districts have very specific build requirements (for example, the Encampment cannot be built adjacent to a City Center). If you see a great location nearby, but do not yet own it, you can purchase the tile from within the lens, and then start construction of the district.

All districts, except for the Aqueduct and Spaceport, have a base cost of 53

Production (scaled to your game speed). However, District construction costs are affected by other variables.

The Specialty Districts are Holy Site, Campus, Harbor, Commercial Hub, Entertainment Complex, Theater Square, Industrial Zone, and Aerodrome. The Spaceport is also counted as a Specialty District for certain bonuses, but is not subject to these production cost mechanics.

The cost of a district increases as you progress along the Technology and Civics trees. Cost increases linearly up to +900% when all Techs or Civics are researched, whichever fraction is larger.

District production cost is also affected by how many of that type of district you have in total compared to other players. If you have fewer of a given district type than the average among all players, the cost of that district is reduced by 25% for you. Districts have the same cost between all of your cities at a given time. The cost of a district is set when you first begin production, even if you switch production and return to it later.

The Neighborhood and Aqueduct (and their corresponding unique replacements) have a fixed cost based on game progression (2% increase per turn over base on Standard speed?). They are not affected by the number of identical districts built by you or by other players.

Unique Replacement Districts cost half as much as the districts they replace and have additional effects.