The Electronics Factory is one of the Unique Buildings from Japan in Civilization VI.

With the invention of consumer electronics in the late 20th Century, Japan quickly became home to the largest electronics industry in the entire world. The first modern electronics factory was built by Sony in 1946, and Japanese innovations since have kept the country most profitable in what is easily the most competitive consumer landscape mankind has ever seen. 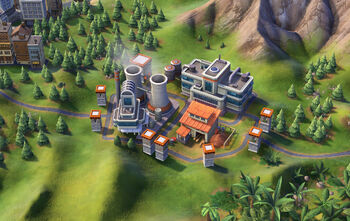