More on this on Wikipedia:
→ Greece

Greece is one of the civilizations in Civilization VI.

Pericles, the Athenian orator, promoted greater democracy for Athens lower classes and brought the city into its greatest Golden Age. Greece's unique ability is Plato's Republic. They get an extra wildcard slot no matter which government they choose. The Greek unique unit is the Hoplite. The Hoplite gets a bonus when other Hoplites are adjacent. The Acropolis is Greece's replacement for the theater district. It gets higher culture adjacency bonuses for being next to districts, especially the city center. It must be built on a hill. Culture also plays into Pericles' ability, Surrounded by Glory. For every city state for which Greece is the suzerain, they get a bonus to their culture.

Greece is a powerful early game culture civ. By allying with city-states, placing your Acropolis well, and using the bonus wildcard civic, you have the flexibility to pursue any victory from the very beginning. The Hoplite will give you the power you need to defend your territory from early aggressive civs, like the Aztec and the Scythians.

Plato's Republic - Gets an extra wildcard slot no matter which government is chosen.

Hoplite - A unique unit that gets a bonus when other Hoplites are adjacent.

Acropolis - A unique district gets higher culture adjacency bonuses for being next to districts, especially the city center. 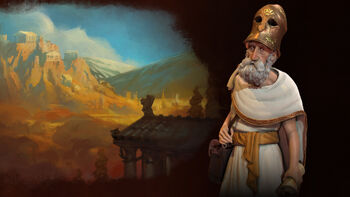