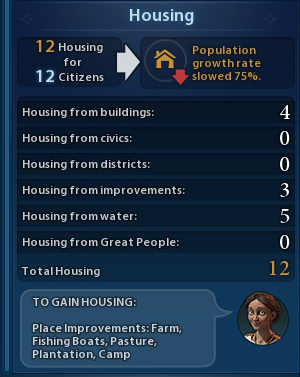 Housing is one of the basic Game Concepts in Civilization VI, which contributes to what make cities grow.

Increasing your Housing can be achieved by the following: Buildings, Civics, Districts, Tile Improvements, access to water: being next to Rivers, Mountains, Lakes, Oasis and some Natural Wonders, by building an Aqueduct, and, lastly, with some

The Tile on which the city was settled also influences the starting housing limit number. If a city has access to fresh water it starts with +3 Housing. If it has access to the Coast it has +1 housing, and if it has no access to water it gets +0 to housing.

This is a new aspect to consider when settling new cities: the Water Availability Guide. The

Aqueduct District can take fresh water 1 tile away from Rivers and Mountains, providing fresh water to cities, giving a boost of +6 to Housing. Cities that already have access to fresh water gain an additional +2 Housing from Aqueducts.

City's Capital starts with +1 housing. The base housing for cities is 2, meaning that a city that isn't a capital and has no access to water starts with 2 housing.

Food plays a part in housing. The basic growing principle is that each of your Citizens in a given city uses 2 Food and the remaining food produced is put towards the production of getting the next Citizen (you'll see the number on the left hand side next to the amount of Citizens in your City), so population increases with excess food.

In the early game (until the Urbanization Civic in the Industrial Era is researched), there are significantly fewer ways to increase housing, and all of them with less effect than the Neighborhood district. Therefore, it is very important to found early cities on tiles with fresh water access, or at the very least, on the coast. Certain basic improvements provide 0.5

Housing: Farms, Camps, Plantations, Fishing Boats, and Pastures. Therefore, it is important to build these improvements around young cities. Aqueducts also provide up to 6

Housing for cities that don't already have fresh water access, and +2

Housing for those that do. However, since the Aqueduct is a district, it will permanently occupy a tile adjacent to your City Center that may be more strategically useful for another district or Wonder.

Once Urbanization is researched, Housing generally becomes less of a problem. The Neighborhood District (or Mbanza) provides anywhere from +2

depending on the appeal of the tile it is built on. Tiles adjacent to certain features (such as Coast tiles or Natural Wonders) receive bonuses to appeal, while being adjacent to other features (such as Marsh or Industrial Complexes) reduce tile appeal. However, since Neighborhoods are much more flexibly placed than Aqueducts, they are less prone to occupying strategically important tiles you may need to maximize other adjacency bonuses or to build Wonders on.