More on this on Wikipedia:
→ India

India is one of the civilizations in Civilization VI.

Gandhi's nonviolent independence movement led to the creation of modern India and he remains revered around the world for his commitment to peace. Ghandi's Ability is called Satyagraha for each civilization India has met which has founded a religion and is not at war, India gets a significant boost in faith. Opposing civilizations suffer additional happiness penalties for fighting wars against Gandhi.

Religion also plays into India's Dharma ability. They get the follower beliefs of all religions present in their cities, not just the one from their own religion.

Just in case the peaceful spread of religion isn't working, India does have the Varu unique unit. It reduces the combat strength of adjacent enemy units.

Ghandi's bonuses to faith in times of peace and the Stepwell improvement mean you'll have plenty of housing and faith when you play as India. If you can become the crossroads for all the religions in your game, you'll be well on your way to victory.

Dharma - Receives Follower Belief bonuses in a city from each Religion that has at least 1 follower.

Stepwell - Indian Stepwells are man-made ponds in which water is aggregated at the center of a series of descending stairs. Marked by complex and elaborate designs that expanded beyond just utilitarian, stepwells made water readily available year-round for drinking, irrigation, bathing, and other uses.

Varu - Originating in India, the Varu, otherwise known as the War Elephant, is one of the world's most intimidating cavalry units. Atop the Varu rests a wooden box where archers and pikemen can attack infantry units relatively safe from harm, while the elephant itself presents multiple dangers to any soldiers within its path. 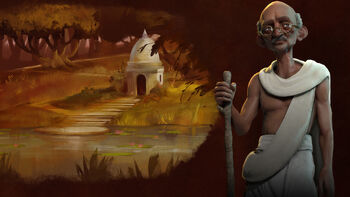