More on this on Wikipedia:
→ Mission

The Mission is one of the Unique Tile Improvements from Spain in Civilization VI.

The Spanish established various missions throughout the New World, the Spanish missions in the Americas, as they colonized it, often slightly varying in nature due to regional differences. The missions served as a base for both administering colonies as well as spreading Christianity. 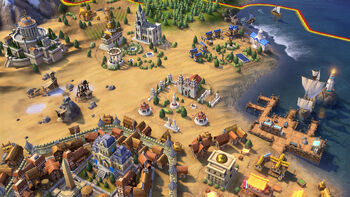