Edit
This article needs an update. You can help the Civ 6 Wiki by adding the latest info. 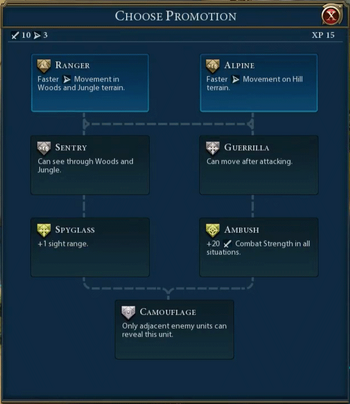 Promotion are the ways to level up your Units in Civilization VI. Promotions are specific to each unit type. For example, Scouts might receive a bonus in their movement stats, whereas Warriors receive an early advantage against Barbarians. Accepting a promotion ends the unit's turn, but also heals the unit by up to 50 Health Points. Promotions can be saved from turn to turn, but the unit will not earn more experience while it has an unspent promotion.