More on this on Wikipedia:
→ Sumeria

Sumeria is one of the civilizations in Civilization VI.

In Civilization VI, each Civilization has two Abilities. One is based on what the nation has done throughout history and the other is tailored to what happened during the ruler's reign.

Gilgamesh leads Sumeria in Sid Meier's Civilization VI. He was said to be two-thirds God and one-third man. Gilgamesh was the hero of history's oldest known work of literature but we're not sure if he was a living person or a legend.

Sumeria's Epic Quest Ability means that every time you capture a Barbarian outpost you also get a tribal village reward.

Sumeria's Unique Unit is the War-Cart. It's very strong for an early game unit, suffers no penalties against Spearman or anti Cavalry units, and gets extra movement if it starts in open Terrain.

The Ziggurat is Sumeria's Unique Tile Improvement. It provides

Science as well as

Culture when it's adjacent to a River but you can't build it on a Hill.

Gilgamesh is an eager ally and more and his Leader Bonus is called Adventures With Enkidu. When fighting a joint war, Sumeria shares pillage rewards and combat experience with the closest allied unit within five Tiles.

Succeeding with Sumeria means getting off to a strong start War-Carts and Ziggurats are available right from the start of the game, and the Ancient Era Civic Foreign Trade gives you the diplomatic option for a joint War.

If you're playing as another Civ you're going to want Sumeria as an ally. Gilgamesh is a loyal ally and enjoys reciprocating friendships with shared work can be profitable for both Civs.

Will your fame resound through millennia? How will you lead Sumeria in Sid Meier's Civilization 6? 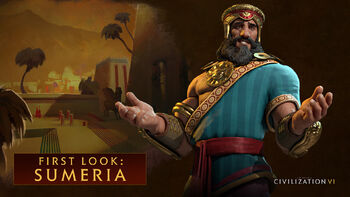